Arcigay: Berlusconi should not try to rebuild his virginity at the expense of gay, lesbian and transsexual people – Arcigay

“As long as we are in power, traditional marriage and gay unions will never be on the same level”. With this cynical statement delivered today, Silvio Berlusconi makes a petty move in front of the whole country. It is yet another ruthless use of homosexuals and transsexuals’ lives and feelings with the sole objective of restoring the alliance with the Catholic electorate, disgusted by months of sexual scandals.

This exploitative attempt is so obvious and cannot deceive anyone because it also includes an attack on public schools in favour of private institutions. President Berlusconi should remember that the Constitutional Court, with the ruling no. 138/2010, has recognized that the rights of LGBT couples living together are the same of married heterosexual couples. It has also affirmed that guaranteeing rights of any citizen of this country is a moral and political obligation for a man of government.

With his statement, Silvio Berlusconi throws out of the window decades of history of equality in Europe, including the Italian Constitutional Court’s decisions and the principles of human dignity that the EU constantly affirms and that he continues to deny. To affirm the right to equality of all people is not a matter of left-wing or right-wing policies, but a foundation for civic awareness and good governance.

The Prime Minister says he fears fundamentalist tendencies from North Africa, but then he brings them to Italy. It is obvious that his model is not the U.S., where a few days ago Obama used significant words in support of same-sex marriage. The Prime Minister should look around and tell us which countries are treating LGBT people like he does. Maybe he will find out that this does not happen anywhere in the civilized world.

History observes and will judge all of us, Mr. President, even you. Remember that millions of gay, lesbian and transsexual people regularly pay taxes and fulfill their social and civic obligations without having the same rights as the other citizens. For these people, your statements are just too ridiculous to bear and for you and for everyone in this country they are really not enough to cleanse your conscience.

Please, do us a favor and rebuild your virginity by appearing in Court to stand trial. Do not wave our lives and our loves as a trophy to the desires of Italy’s most backward side. 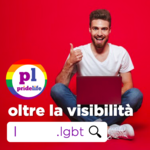 Arcigay: Berlusconi should not try to rebuild his virginity at the expense of gay, lesbian and transsexual people
Download Chiudi